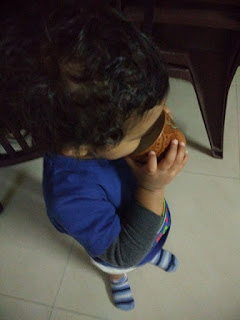 A small but significant step in making our little ones more independent, responsible, confident & self-sufficient

We started with a ceramic cup for his milk last week. He is 22 months. It was completely led by him.It started when I gave him mud clay figurines during Diwali for decorating them on the killa. I told him it’s made of mud n easily breakable so be careful while handling. He played beautifully with them. One figurine accidentally broke while playing n he realized what it means to break n the consequence that he won’t be able to play with it.
He then started asking for our tea cups (ceramic). I gave him telling they are breakable n he handled them beautifully. He used to take them from the kitchen slab, play n give me back happily.
Then one day he said he wants to have his milk in papa’s tea cup. I gave him n he happily drank it by himself! This weekend I got a ceramic cup for him exclusively n he was super happy

Its all about trusting them & respecting their demands, of course under supervision & danger limits.

I cannot count the reasons why I love Montessori

5 Scary Realities Every SAHM (Stay At Home Mom) Should Know