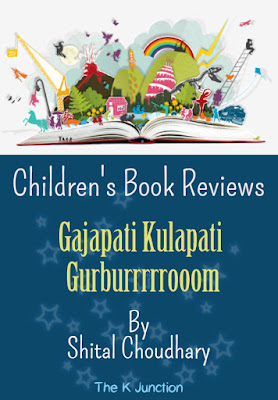 Wondering which books to read to your child? Welcome to this wonderful 10 weeks long project of #MondayMorningReviews where Shital Choudhary, a passionate storyteller & a mom herself, shares children’s book reviews every Monday! The age group for these books is 0-4 years. This review series will help you choose the best books for your baby / toddler / preschooler / kindergartener. This week’s pick is Gajapati Kulapati Gurburrrroooom. Read on this full book review.

About Gajapati Kulapati:
Gajapati Kulapati (GK) is a gentle BIG elephant, who is a darling of all the villagers. They fuss a lot over him, feed him, play with him, take care of him … and he loves them back.

About The Book:
In this particular book, villagers like banana-seller, farmer, flower-seller and post-man feed different things to GK. After over-eating in this way, he gets a BIG stomach ache. Everybody starts getting worried. Post-man goes on to call the doctor … how will he get cured? Read the book to find out.

About The Series:
There are three books in this series, all super hit among young children. Each book tells you a funny little tale of the friendly elephant named Gajapati Kulapati. The name itself is a tongue twister to the toddlers and that’s the beauty … toddlers LOVE to repeat “Gajapati Kulapati – Gajapati Kulapati” in their cute little baby-language and the storyteller enjoys this constant interaction whilst telling the story.

Sounds Used In The Series:
The series has one quite notable feature, which is its Sound language. Lots of sounds are used to describe events, emotions, gestures and actions. For instance, the second book in the series (GK- Kalabalooosh) uses sounds like Plish, plosh, glish, glosh, bloosh, woosh, kalabaloosh to represent splashing into the water sounds, Gaga-Gada Gadum gadum for sound of elephant’s speed of running. The GK – Gurburrrrrooom book uses Mummmmmummmm sound to represent chewing, eating, Owowooooh! for crying, etc. 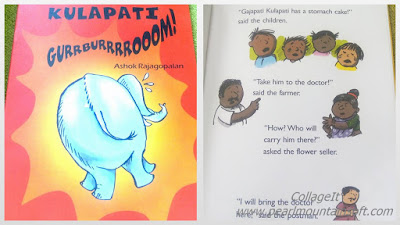 Toddlers and tiny babies would JUST love these sounds, maybe because that’s just the thing they learned very first in their lives?

About The Author:
Ashok Rajagopalan (popularly known as Achhok Rajgolapan or Ashok Rajapalanan, etc. among the toddlers) has not only created this brilliant kiddy tongue twister name Gajapati Kulapati and its cute stories but also beautifully illustrated all the books in this series.

Not to be missed series for all the toddlers and of course performing Storytellers!
This book review is a part of 10 week long project #MondayMorningReviews which is going on in our Facebook Group. Join in the tribe of involved & conscious parents HERE now! You can find ALL the book reviews under this project HERE.
Do not forget to follow us on Facebook page & closed Facebook group, Twitter and Instagram for day to day updates that might not always find a place on this blog. Subscribe to our YouTube channel to know more about our early learning journey, DIY & Montessori-inspired activities for kids, kids books & toys reviews and much more!


Hope to see you around. Happy Parenting!